Cycling 1 day around Hue Imperial City
Unlike the busy cities of Saigon or Hanoi, Hue life is more quiet and slow. Still many people use bikes as daily mean of transportation to go to work and school. Biking in Hue is an exciting experience to visit the world heritage complex in Hue, including Imperial City, Royal Tombs, Buddhist Temples … in Hue

Highlight:
Huế originally rose to prominence as the capital of the Nguyễn Lords, a feudal dynasty which dominated much of southern Vietnam from the 17th to the 19th century. In 1775 when Trinh Sam captured it, it was known as Phú Xuân. In 1802, Nguyễn Phúc Ánh (later Emperor Gia Long) succeeded in establishing his control over the whole of Vietnam, thereby making Huế the national capital.

Huế was the national capital until 1945, when Emperor Bảo Đại abdicated and a Communist government was established in Hà Nội (Hanoi), in the north. While Bảo Đại was briefly proclaimed “Head of State” with the help of the returning French colonialists in 1949 (although not with recognition from the Communists and the full acceptance of the Vietnamese people), his new capital was Sài Gòn (Saigon), in the south. 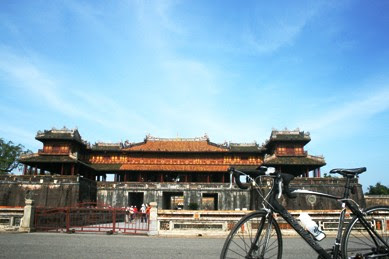 Being an ancient romantic land, by the 13th Hue had already been added to Dai Viet Kingdom (Vietnam nowadays) as a gift from Champa King when he married Princess Huyen Tran of the Tran Dynasty. Hue has been representing the cultural and spiritual center of Vietnam for a long period of time. This city is famous for its magnificent architecture of citadel, palaces, pagodas and royal tombs built under the 13 emperors of the Nguyen Dynasty in a poetic background of greenery on the banks of the Perfume River. Hue was recognized as the World Cultural Heritage by UNESCO in 1993. 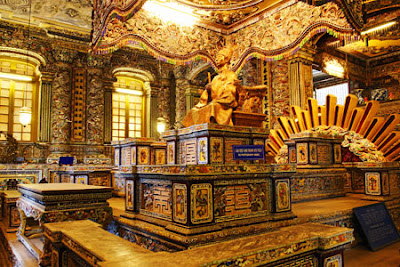 Start at 08:00am, we cycle to visit the Hue Citadel and Imperial City, which will take us about 2 hours and a half. Then we bike upstream the legendary Perfume River. Along the way, we stop for Thien Mu pagoda, then continue to the rolling hills of the surrounding countryside where we find the Royal Tombs to the Nguyen Emperors. We visit Tu Duc and Khai Dinh tombs. After having viewed the splendid landscaped gardens and ornate architecture of the kings’ final resting places we return to Hue 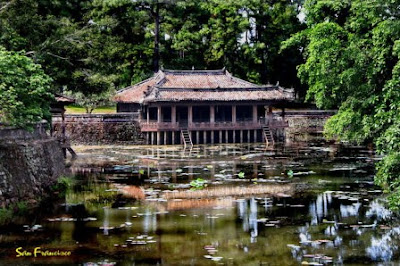 TOUR PRICE:
Rates vary frequently. Please contact us to get the best possible price based upon your travel period and specific touring needs.

One thought on “Bike tour around Hue (full day)”