The vignettes from Vietnam come in multitudes. The country has spectacularly scenic locales, vibrantly colorful cities, quaint towns and villages where life flows languorously and some amazing architectural creations that actually seem poetic.

The Vietnam popular destinations promise a colorful and versatile assortment. Ensure that you include them in your Vietnam travel guide.

Vietnam is a little known country and mostly known for its stunning natural beauty that resides in its forest lands, beaches and the riverine terrains. In your Vietnam tours, Halong Bay, Vietnam, a UNESCO World Heritage site, is one of the Vietnam popular destinations that definitely merits a visit. The dramatic natural setting herein consists of over 3000 rock formations dotting the Gulf of Tonkin, interspersed with numerous caves, beaches and secluded coves.

Vietnam boasts of an array of pristine beaches, where the sands are soft to the feet and the azure waters are brilliantly clear. Head out for the breathtakingly beautiful sands of Phu Quoc Island, Vietnam, considered by many to be the best beach resorts in Vietnam or the piece of Hawaii at Mui Ne in Phan Thiet, Vietnam. Other beach destinations that shouldn’t get the miss while you are sightseeing in Vietnam are the Nha Trang Beaches, Vietnam and the Danang Beach, Vietnam.

Nurture your soul and your senses in the verdant greenery of Vietnam’s national parks. The Ba Be National Park, Vietnam and the My Son Sanctuary, Vietnam are some of the most popular of the tourist destinations in Vietnam, famed for both their scenic settings and the wealth of indigenous flora and fauna specimens to be found here.

Get closer to Vietnam and know the influences that have shaped it up. The historic tourist attractions in Vietnam include the Ho Chi Minh City, Vietnam, still affectionately alluded to as Saigon by the locals and “The Pearl of the Orient” by the foreigners, the World Cultural Heritage sites of Hoi An, Vietnam and Hue, Vietnam and of course, the ancient city of Danang, Vietnam. These places still treasure numerous historical monuments dating all the way back to the dynastic era in Vietnam and a visit to these Vietnam popular destinations will help you better comprehend the historicity of the land.

Popular cities and provinces in Vietnam 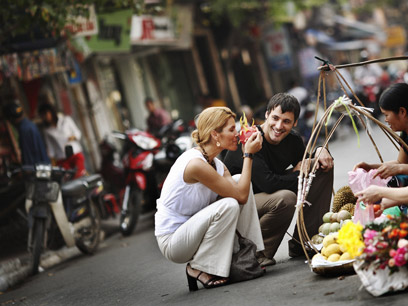 Hanoi seduces tourists from the moment they land in the city with a landscape like no other Asian capitals. Motor buzz found in almost all hours and French style architecture mingle with the calmness of coffee drip constitute a picture of this thousand year old city. Ho Chi Minh Mausoleum, Temple of Literature, Water puppet theatre, Museum of Ethnology are few among the must-sees in Hanoi [more …]

In this day and age, whenever a tourist thinks about Vietnam as one’s next destination, the natural wonder of the world – Ha Long Bay should immediately pop up in one’s mind as a must-see attraction. Words alone cannot fully describe the breathtaking beauty of Ha Long Bay with more than 3,000 islets settled in spectacular formation rising on the emerald water-surface of the Gulf of Tonkin [more …]

The small town, which used to be Vietnam’s major commercial port from the 15-17th century, bore the integration of Japanese, Chinese influences with Vietnamese traditional style in its architecture. Chinese Assembly houses, Japanese bridge and the tiny alleys lined up with yellow traditional homesteads are all well-preserved by local families. These are the places people can track the evidences of a period when Hoi An was a busy and crowded port with people from all over the region [more …] 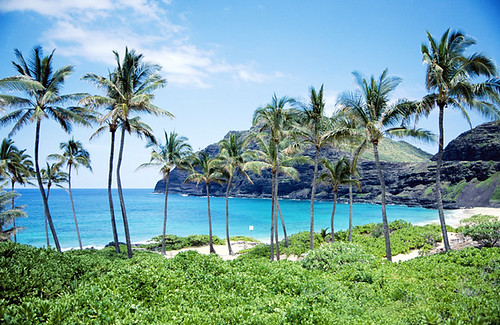 Located at offshore area of Haiphong City, Cat Ba Island is one of the most popular destinations to families and large group of travelers. From Haiphong to Cat Ba Island, tourists can choose to travel by either boat or ferry. Boat is speedier and only takes an hour to reach Cat Ba Island, but many travelers still select the 80 minutes sea ferries to come to the island. The reason is peaceful and relaxing atmosphere when travelling by ferry, which might not be obtained when traveling by speedboat [more …]

The multi-ethnic town of Sapa has charmed many tourists who spare anywhere from a few days to a few weeks there. After 8 hour train ride and 1 hour by bus, tourists will be thrilled by the landscape and people here: from the lush green Sapa rice terrace to colorful clothes of Hmong and Yao women. Sapa is a great place to visit, and forever to be remembered [more …] 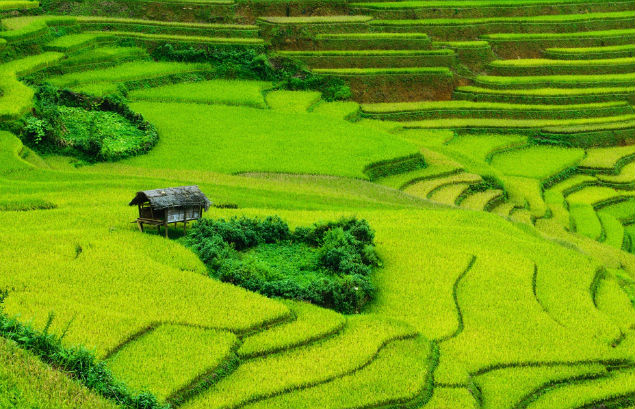 Leaving the hustle and bustle of cities behind, many tourists choose Mai Chau to integrate with the nature, to have relaxing moment enjoying freshest atmosphere and to explore special culture of ethnic minorities living there. Mai Chau is part of Hoa Binh Province in the northwestern region of Vietnam, which is 160km from Hanoi [more …]

Ha Giang is located in the Northeast area of Vietnam, which is adjacent to Cao Bang Province to the East, Yen Bai and Lao Cai Province to the North, Tuyen Quang Province to the South and China to the North. This is one of the most famous tourism destinations in this area with diverse tourism value, but most of travelers come to this province for either admiring magnificent natural scenery here, or exploring rich culture of minor communities in this place [more …] 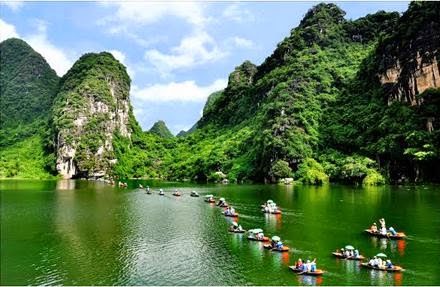 Like its brother Ha Long Bay, Ninh Binh’s panorama of otherworldly landscape of massive limestone karsts is best viewed by boat. But in Ninh Binh’ case, instead of an emerald sea at the base of its cliff faces, a network of limestone peaks tower from rice paddies and mellow stream meander through ancient caves wrapped by several section of Hoang Long river
Recently, Trang An Tourism Complex in Ninh Binh Province has been declared a World Culture and Nature Heritage site by UNESCO in 2014[more …]

An attractive girl may appeal men at first sight, but it’s a girl with pretty soul that would hold his heart forever. Hue may not be impressive or overwhelming as one first sees the old city filled with trees, small houses and perhaps all-day-long-rain, but he or she will gradually fall deeply for the serene picturesque flow of Perfume River, winding along ancient tombs and pine hills [more …]

The small town, which used to be Vietnam’s major commercial port from the 15-17th century, bore the integration of Japanese, Chinese influences with Vietnamese traditional style in its architecture. Chinese Assembly houses, Japanese bridge and the tiny alleys lined up with yellow traditional homesteads are all well-preserved by local families. These are the places people can track the evidences of a period when Hoi An was a busy and crowded port with people from all over the region [more …]

Quy Nhon is a beautiful, quaint little beach side town in the South Central region of Vietnam, virtually half way between the popular towns of Nha Trang and Hoi An. The town is known for its beautiful surroundings, Cham temples, and nearby beaches. While tourism is increasing in Quy Nhon, this tends to be local tourism, and for the majority of travelers it remains relatively off the beaten track. The town is perfect for those who want to break up a journey between Nha Trang and Hoi An, being about 6 hours from each [more …] 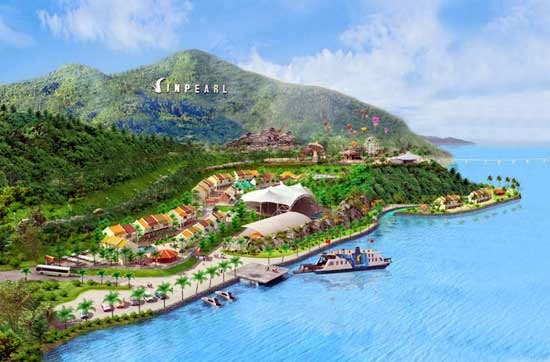 Nha Trang, the coastal city in the south of Vietnam, has arguably the best city beach Vietnam has to offer. Nha Trang is well-loved for the same reason: a beach perfect for a few-day-relaxation, where the sand stretches along the bay for 6km and for most of the year the sea is brilliantly turquoise blue. The city also has the best nightlife in Vietnam outside of Saigon, with numerous bars catering to the budget and tourist market.

Mui Ne is quickly developing a reputation as the action capital of the coast. Famous for its wind-and-kite-surfing, the winds here are as reliable as clockwork, but the best time to surf up is from August to December. If this all sounds too much like hard work, you can simply splash about in the warm turquoise blue water.

The land of flowers, the city of romance and love, etc – are lovely words that people use to describe Da Lat. This so-called paradise in the South Central Highlands of Vietnam owes its beauty and pleasant weather to the high altitude and surrounding peaks. Ever since the exploration of French, Da Lat’s pure natural beauty has been added with human’s hand by French-style houses, villas, treatment places, and temperate flowers & plants [more …]

Buon Ma Thuot is the city of Dak Lak province which is in Central Highland in 400 – 800m high above sea level. There are beautiful and famous waterfalls such as: Thuy Tien, Trinh Nu, Krong Kmar, among many big lakes such as Lak, Dak Mil…Coming there, tourists are able to get in the primitive forests of the Chu Yang Sin, Yok Don National parks, visit Buon Don. [more …]

The so-called Pearl of the Far East – Saigon – has now become a young, dynamic and attractive place, where millions of people gathering to seek for opportunities, thanks to its favourable weather and kind-hearted people. Being the country’s biggest city, it is a mixture of modern and classical beauty, with high towers rising up beside old villas or typical Cho Lon Town lying near by new city Phu My Hung Residential Area [more …]

Hardly any part of Vietnam is blessed with such a rich soil and hardworking people like Mekong Delta, where the national grain is grown. As one travels away from the overcrowded Ho Chi Minh City to the Southwest, he or she will be pleasantly surprised by the landscape and people here, which are both too sweet to resist.

Con Dao is an island off the southern coast of Vietnam, or a 45-minute flight from Ho Chi Minh City. It is an island of immense natural beauty with deserted sandy beaches and extensive coral reefs with ample opportunities for swimming, snorkeling and diving. The coastline also boasts forested hills making it excellent for hiking through the jungle and looking for wildlife
Con Dao was also voted one of the world’s Top 10 most attractive islands in Lonely Planet Magazine. With a prison system originally built by French colonists, the island was once known as “Hell on Earth”. Today it’s better known as “Heaven on Earth” with stretching white sand beaches, colorful coral reefs, scenic forests and beautiful blue skies. [more …]

Phu Quoc owns the most beautiful beaches and delicious seafood in Vietnam. Sea with blue color and many different coral abundance, and stretches of fine white sand beach, the uninhabited islands with green coconut trees silhouetted by the sea … just some of the many things to change Phu Quoc become paradise [more …]